For U.S. orders, we currently ship via the United States Postal Service (USPS) for orders up to 5 books or 5 pounds. Most orders over 5 pounds will be shipped via United Parcel Service (UPS) Ground or your expedited method of choice. Orders can only be shipped to a U.S. PO box delivery via USPS. All other orders require a physical address for delivery.

For Canada and international locations, we currently ship via UPS.

Skip to the end of the images gallery 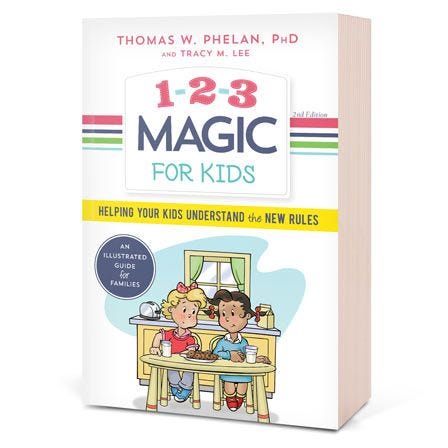 Skip to the beginning of the images gallery
Overview

The popular 1-2-3 Magic parenting program has been adapted to be introduced from a child's point of view! This innovative guide explains the child discipline system―from counting and time-out methods to how better behavior benefits the entire family and leaves more time for play―with clear, easy-to-understand language and lots of illustrations. 1-2-3 Magic for Kids describes the basics of the 1-2-3 Magic program, including positive reinforcement, charting, and the docking system.

A question-and-answer section outlines common family situations and questions from kids, including:

• What if I don't go to my room?
• Will I still be counted if I have a friend over?
• What kinds of things can we do for one-on-one fun?

Crossword puzzles, word searches, and journal suggestions further encourage children to apply what they've learned about the methods, and make 1-2-3 Magic for Kids a fun way to get kids on board with the new rules at home.

In addition to writing and producing, Dr. Phelan maintains an active schedule of international lectures, and is a frequent guest on radio and television. His articles appear in numerous regional and national publications. Dr. Phelan received his Doctorate from Loyola University Chicago in 1970 after completing his internship at the Loyola Child Guidance Center. He worked at the DuPage County Mental Health Center until 1972 and then entered private practice.

He has also served on the boards of directors for both ADDA and CHADD, two national organizations for the parents of children with ADD/ADHD. He was inducted into the CHADD Hall of Fame in 1997.